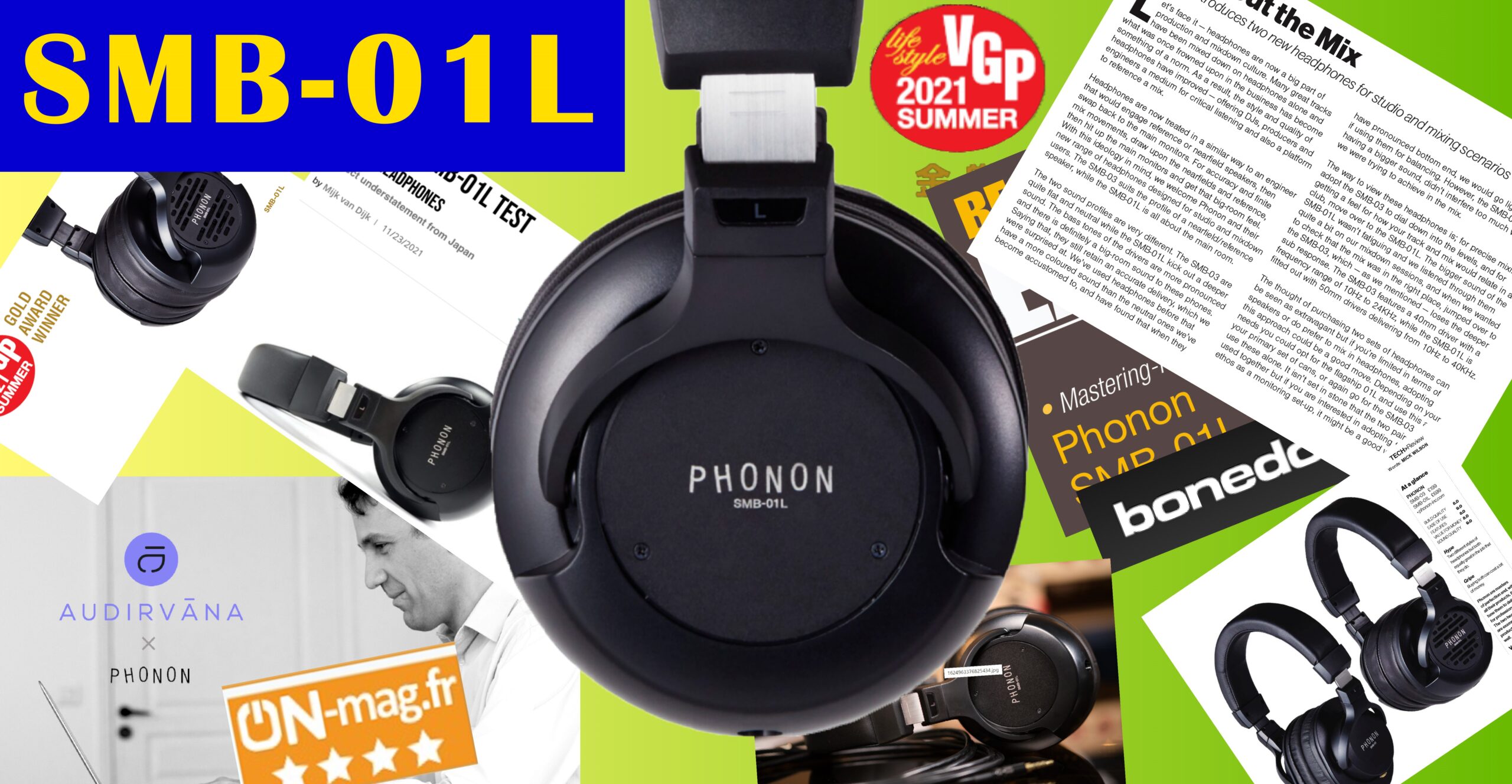 Since its launch in September 2020, the SMB-01L has won music awards in many countries and received the highest ratings across the board on review sites around the world, making it the world’s best headphone and a favorite of many sound engineers.

PHONON products have been loved by many engineers: the SMB-02 was called “God’s Holy Grail” by The New York Times, and the MOBILE HI-FI PHONE 4000 is a compact, on-the-go headphone with the PHONON sound in the most compact form possible. Even now that the product is no longer available, there are calls for its re-release.

Why have professional engineers and musicians loved PHONON products so much? It is impossible to talk about it without mentioning ISAO KUMANO, the developer of all PHONON products and representative of PHONON.

After many years of working as a mastering engineer for leading artists, he started PHONON in search of his own sound, and the products that he has tuned to his full satisfaction have achieved a sound that is distinctly different from that of ordinary products that are designed and manufactured based on calculated values.

The effect is so great that it has led to a great reputation for the unprecedented spatial reproduction and sense of speed that is consistently realized throughout the product as a result of the pursuit of sound quality that incorporates tuning methods that other sound manufacturers would never use.

The SMB-01L is the culmination of PHONON’s sound quality technologies announced in September 2020. The goal was to realize studio large monitor sound in headphones. The SMB-01L, created for all professionals, quickly became the talk of the industry and won several international music awards. Here we have compiled a list of its illustrious achievements for your viewing pleasure. Page 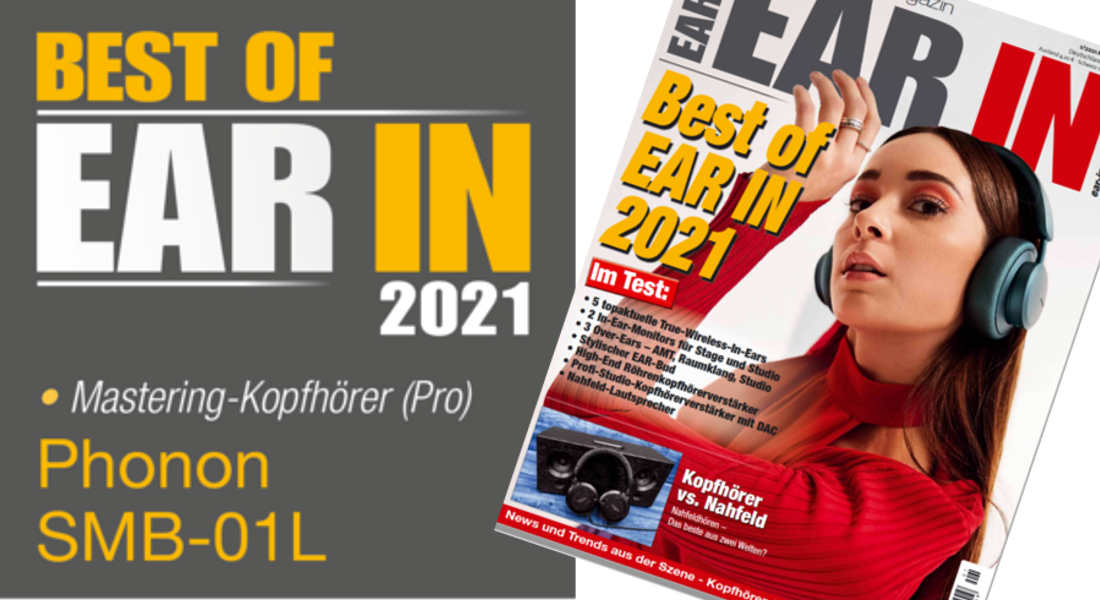 Won the “Pro-Mastering (kopfhorer) headphones” category in the German headphone magazine EARIN “Best of EAR IN 2021”.
At the same time, MUSICLIFE ML-2 also received a high evaluation in the same magazine, and the two products graced the cover of the magazine, which was also sensational.
The SMB-01L received a score of 1.3, which is almost the highest among the 5 to 1 review scores, and was awarded “Best of EAR IN 2021 Pro Mastering” in the “Pro-Mastering (kopfhorer) Headphones” category. They were awarded the “Kopfhorer (Professional Mastering Headphones)” award.

The SMB-01L shows that PHONON is in the top league in terms of sound.”
These words are proof that PHONON is not just world-class, but at the top of the game.

A detailed test review of the SMB-01L by Mijk Van Dijk (5/5) was posted on bonedo, another top German music instrument website.
The SMB-01L is in the top league of headphones for perfect sound.”
The sound image is very vivid and detailed, and the high frequencies are crystal clear and very transparent.
The product received a wonderful review and was awarded the highest rating of 5 stars. 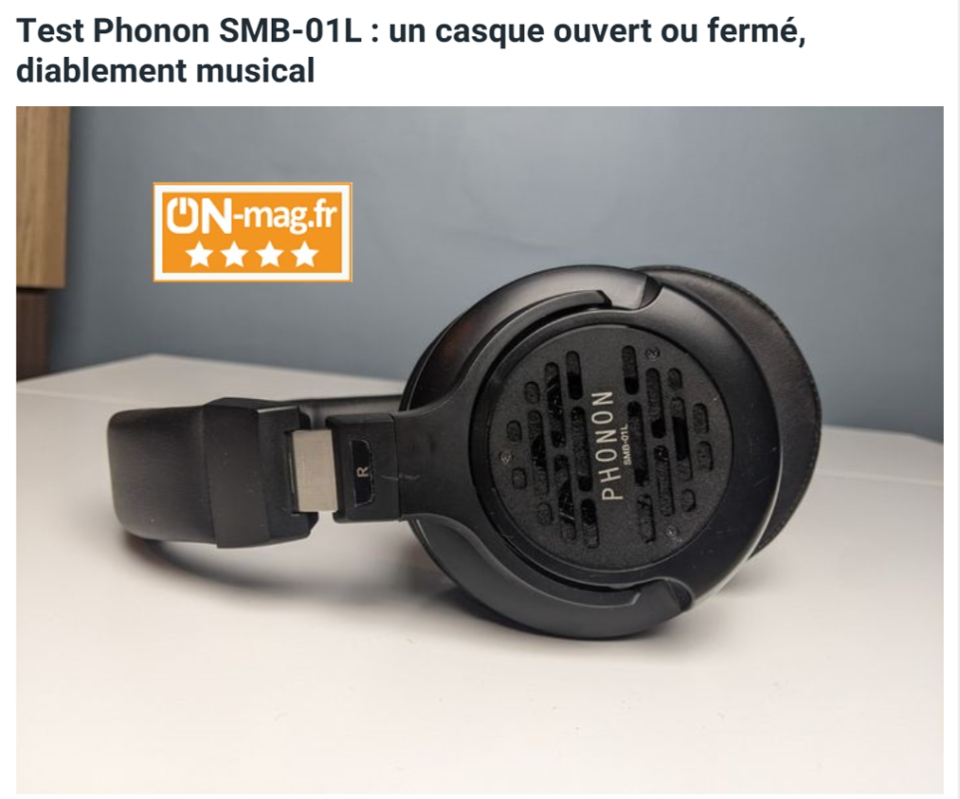 French online audio magazine “ON-Mag” ridiculed the SMB-01L as a small UFO, and at the same time, rated the 01L as the ultimate all-rounder.
The magazine gave the SMB-01L a high score of 4.5 out of 5, with the biggest compliment of all: “It’s musical like the devil.
He also highly praised the dual personality of the device, which has both sealed and open characteristics. 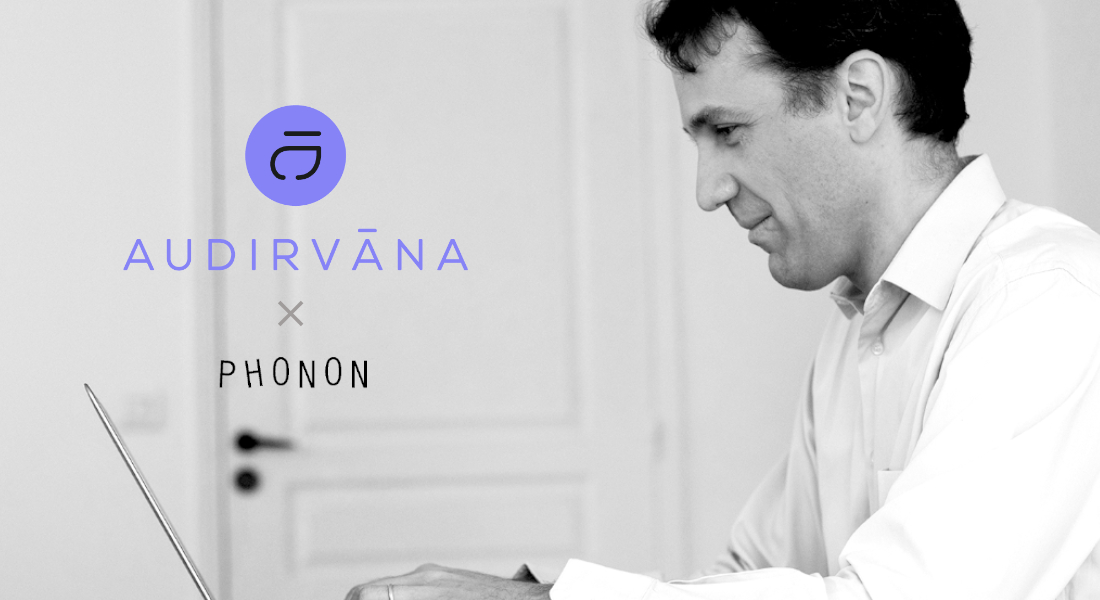 Audirvana CEO Damien Plisson’s review of the 01L, which he wrote in his own words, was also surprising, as he is strict about audio quality and was surprised that it was a “real high-end audio system.
Audirvana, a French high-quality sound reproduction software company, was founded in Paris in 2011 with the goal of maintaining the integrity of computer-based high-quality digital music and absolute transparency during playback.
The CEO of Audirvana, Damien Plisson, who is loved all over the world, posted an article in which he praised this device with open arms.
He has checked many audio devices with Audirvana’s sound system, and the article said that the perfect reproduction of this device gave him goosebumps.
The reviewer’s article showed how modern and functional PHONON products are, with their near-perfect response to the reproduction of digital music through the system.

The Vinyl Factory operates the only major pressing plant in the U.K. Recognized around the world as the pressing plant that pressed some of the most iconic records in history, including The Beatles, Pink Floyd, and The Sex Pistols, The Vinyl Factory oversees the publication of The It is also fresh in our minds that Vinyl Factory selected this unit as the best mid-range headphone by the magazine. According to the article
The Phonon SMB-01L takes audiophile-level sound very seriously. With these semi-open 50mm driver headphones, you can expect an almost studio-like listening experience. Phonon has also extensively tested these headphones against a variety of reference materials. The result is a very acoustic and balanced sound profile, no matter what genre you are listening to. In addition, the SMB-01L has been tuned to resemble a large, high-end audio monitoring system.” He highly praised the performance of the 01L.
The 01L has received this kind of praise from the media that seems to function in the global market. 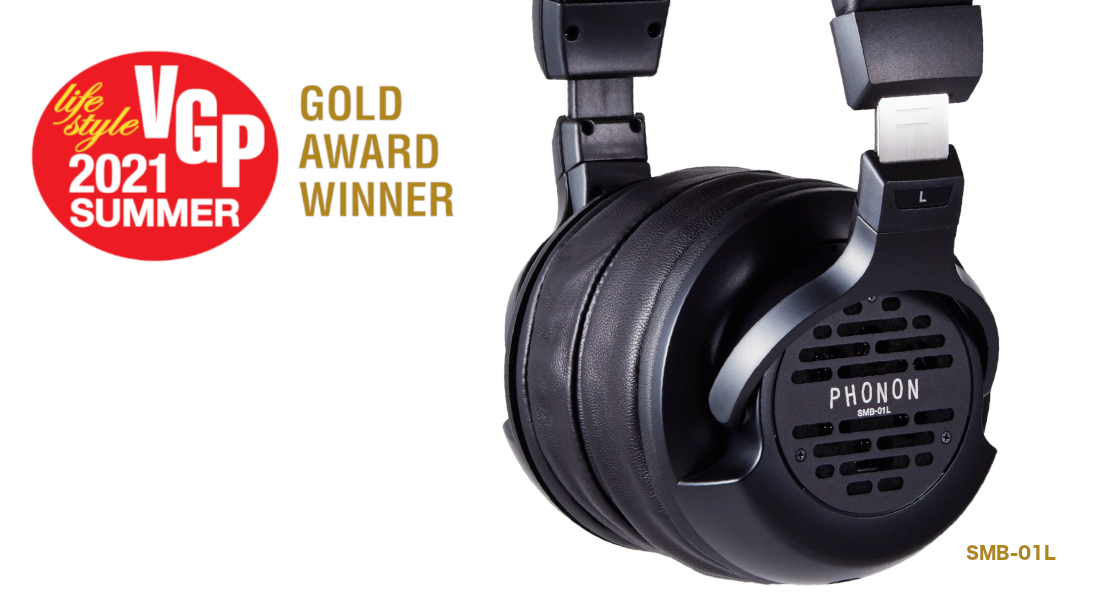 The VGP2021 SUMMER AWARD, one of the largest audiovisual awards given in Japan in 2021, won the Gold Award, beating out many of the country’s top manufacturers.
The “must-buy” products are selected through a rigorous professional judging process by critics who are well versed in the appeal of audiovisual equipment in Japan and by leading dealers nationwide.
Among a wide variety of products ranging from televisions to projectors and smartphones, the Gold Award (the highest award) was awarded in the category of sealed overhead headphones (between 75,000 yen and 100,000 yen). Furthermore, three other products (SMB-02, SMB-03, and ML2) also won awards at the same time.
For PHONON, whose reputation had preceded that of its Japanese counterparts overseas, the strength of the products presented by this device was nothing less than the establishment of its position as a truly representative Japanese sound manufacturer.